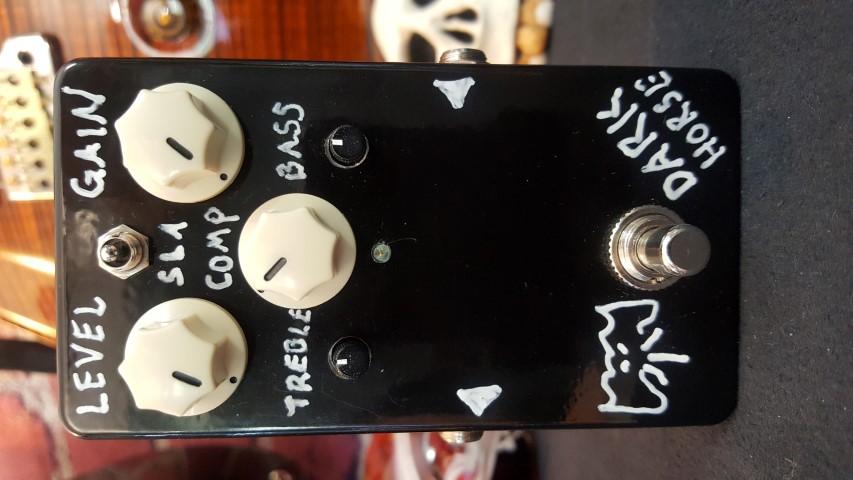 The DARK HORSE is a hard-edged distortion beast. From bluesy hints of low-gain grit, to face-melting doom in a box, the DARK HORSE distortion pedal defies genre classification. The active Baxandall tone stack adds a huge range of tonal variations: from mid scoop to mid hump, bass boost to treble boost, and any shade between. The unique COMP control lets you control the pedal’s dynamics, from long, singing sustain to earth-shaking distortion.

HOW THE DARK HORSE CAME TO BE

The early hand-painted Dark Horse pedals were built from the original DS-1 distortion circuit. The circuit had a great biting edge to the distortion, but was really limited in its bottom end response. I completely overhauled the circuit, from the pregain, post-gain, EQ and clipping sections, plus a charge pump for extended headroom, I changed nearly everything in the circuit. The final design allows the user to fine tune the character of the distortion with the internal FAT trimpot, from tight & punchy to thick & meaty, and from there is an endless array of tonal and compression controls to shape the perfect hardedge distortion tone.

LEVEL: Simple output volume control. It’s technically a passive attenuator, which means it lets you tame the huge signal inside the pedal. Crank it up to unleash the beast and push your amp way past 11.

GAIN: Sets the gain of the primary gain stage. There is a HUGE amount of gain on tap, but the extended headroom provided by the internal charge pump provides the power to supply the extra gain.

COMP: Sets the amount of compression of the distortion. Turn it back for lead tones with singing sustain, or push it forward for dynamic, ballsy in-your-face distortion tones.

TREBLE: Controls the treble boost/cut. About +/-12dB of range. This control is post-EQ

BASS: Controls the bass boost/cut. About +/-12dB of range. This control is post-EQ

FAT: Internal trimmer that works as a pre-gain bass boost.