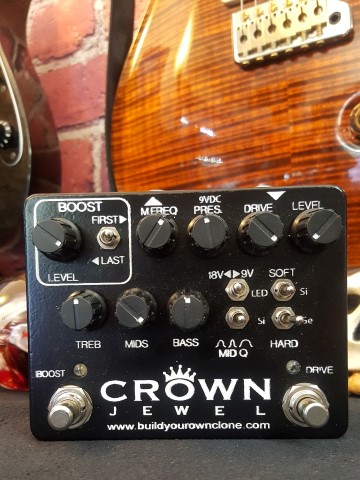 This is my first Build Your Own Clone build and wouldn’t you know it is not a clone. It is a very versitile distortion that has a lot of features. I got this as a kit so I did not have to source my own parts. I also got 2 of the boosts: the LPB-1 and the MOSFET module. There is a speed build of the kit below.

The Crown Jewel from Build Your Own Clone is the ultimate drive and boost combo. It is not a clone of anything. It is an amalgamation of the best qualities from many different circuits to create something entirely new that is capable of producing a range of overdrive and distortion tones like no other analog pedal has before.

With a parametric midrange, and 3-way Mid Q switch, the 3-band equalizer allows you to voice the drive channel in almost any way imaginable.

The Crown Jewel has an internal charge pump that provides 18 volts to the drive channel circuit while still using your standard 9VDC negative tip power supply. The 18V/9V switch lets you decide how much voltage is supplied to the drive channel. Use 18V when you need more headroom or output. Use 9V for more traditional overdrive and distortion characteristics.

The finishing touch on the Crown Jewel is the soft touch, clickless, pop-free, true-bypass, relay switching for both the drive and boost channels.