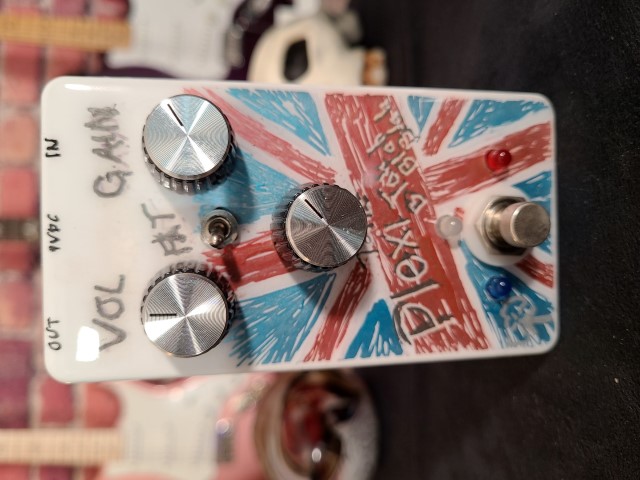 This is the first pedal to get painted. I thought the scribbled Union Jack would be easy. I was wrong. The name "Plexi blah blah blah" is an indication of my frustration of not knowing how to paint with the pens.

This is also the first time I took a little artistic license with the electronics. It is only putting in 3 LEDs instead of one but it was new for me. Not actually following the instructions.

From the original manual:

At lower settings, it can morph into a much more generalist overdrive, with the voicing of the pedal still inuencing – but not determining – your overall tone. This makes it what we in the pedal business call a little bit of a “chameleon,” capable of working with nearly any piece of gear and adding some extra responsiveness and drive to the sound, with extra tone shaping to boot.

Advanced tip: owners of British amps will love the ability to get their crunch tone at lower volumes thanks to the pedal’s flexible voice! It may be a “MIAB,” but it will play nicely with any British amp too, without any concerns of overpowering the sound or getting too much emphasis on those special frequencies.