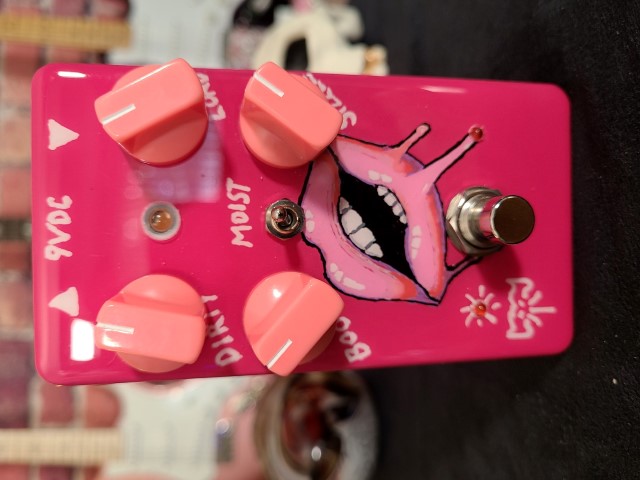 My first pedals to have visible clipping diodes. I know I wanted to try to do something cool for this pedal. I used the clipping leds to make it look like the big drip and the little flare are lighting up. This thing is a gnarly beast.

So this is the second pedal that I actually tried to make decent art for. I practiced on one of the Mouser bags that I got supplies in. I changed it up a little when I painted onthe enclosure but I was happy with that I had.

One thing that I learned was that the red pgiment in the ink sinks during baking. So while it makes it harder for the ink to come off. I can not fire pictures with red a more than 250°F. I now only go that high and for only 15 - 20 minutes. You can see the difference between pictures 2 and 3. The pink is more prominent and there looks like there are cracks on the upper lips. I almost like it better, but it changes the style.

Pictures 3 - 5 show the guts. I socketed the clipping LEDs because I knew I wanted them on the outside. I use the ling wire to help force them into the socket when the cover is on. This is not ideal. I think I will solder them from now on. There is always the change of them slipping. Then the sound is a lot different.

The final pictures show it done. I really like the twinkle of the LEDs on the from when I am playing. I think it is a nice touch. I also did not label the guch because that is where the open mouth it. You get the idea.