PedalPCB™ Wrectifier, clone of the Wampler™ Triple Wreck
“Twenty years from now you will be more disappointed by the things that you didn’t do than by the ones you did do.” –Mark Twain 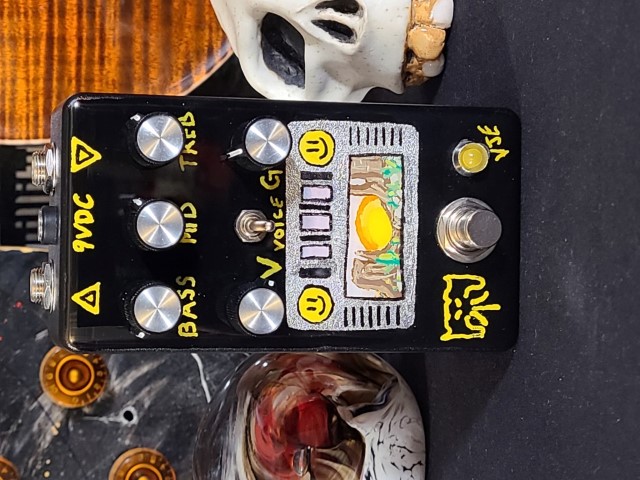 I knew what I wanted to do for the art on this pedal over 70 pedals ago. It just took me more than half a year to feel comfortable enough to attempt it. I talk alot at times about not worrying about being perfect and to just go for it and do the things you want to do. Failure is not a bad thing. Things can be done again. But sometimes I fall to my uncertainty. That is why I chose this quote. It is also the quote on the Wampler site about the “Cost of Tone Chasing”.

This is another pedal with metal leaf on it. I drew the desert scene first. (I used to Jeep in the desert a lot and really enjoy it). I then used the glue to try to draw the front face of a Wrangler. Put on the leaf and drew the headlights and extra slots. Not exact but I an happy with the way it came out.

I epoxied the front of this and like the way it makes the art pop but I am not sure if I like it better than the matter black.

This pedal is HEAVY though. It has such a chug. I now need to make a dual footswitch version with the Boost and boost contour.

From the Triple Wreck manual: