Carcharias Effects™ DC6FX Sagan Delay v2.1
“Somewhere, something incredible is waiting to be known.” - Carl Sagan
“The word ‘LOVE’ designates a subjective condition in which the welfare and happiness of another person are essential to one’s own happiness” - RAH 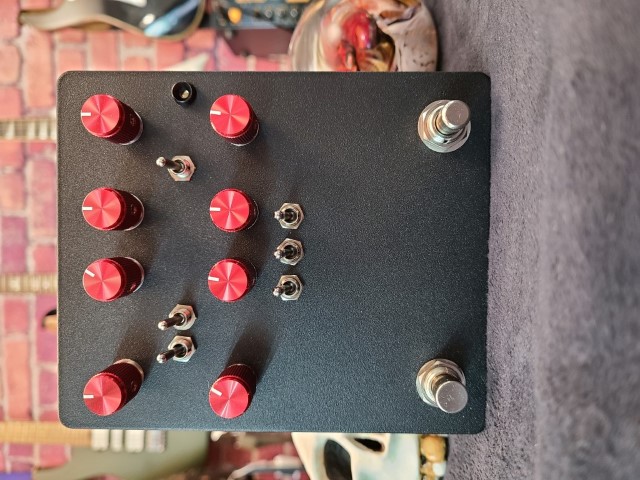 This was a challenging build and there are some things that are confusing. One thing I had trouble with is the sourcing of parts. Well the transistors. There are 3 different varieties of BC550, and I was unsure if I shoud use BC550B or BC550C. It is not spelled out in the docs. I had to ask on the Facebook group. There is also an LED on the PT2399 board that is optional but there is no indicating why it is optional. Is it an indicator or does it have an effect on the circuit. From what I remember it helps clean up the repeats.

Another issue I have is the layout of controls, or at least the foot switches. There is just too much going on for it to fit in the 12590BB footprint. I used a 1590X which is a really deep 1590XX enclosure. It is HUGE. I think I am going to do some modification on it to try to create indicators for all the repeats. At least that it what I am telling myself I will do with all the extra room.

The following are the standard external controls for this pedal:

The circuit also includes two internal trimmer controls, which could be technically externalized if you wish to drill a small hole in the face of the pedal enclosure: