PedalPCB Cleaver, Clone of the Keeley™ Katana Boost
“Music is the soundtrack of your life.” - Dick Clark 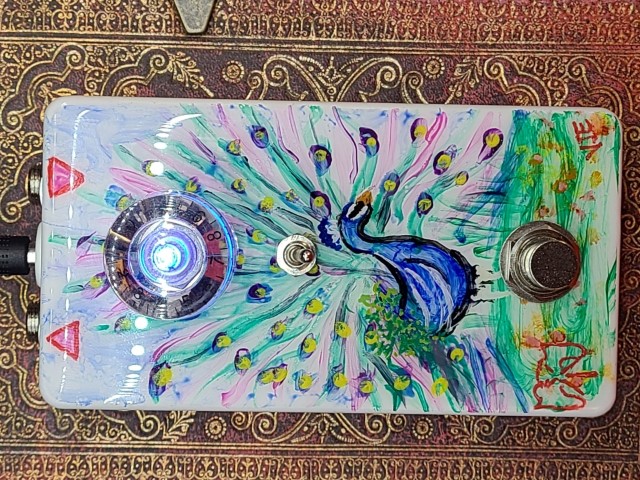 I rent a very small 2 room apartment in a private home. This is where I do all my building and work. This is also why I do not do etching even though I really want to try it out.

Well I tell you this because my landlord is also a musician. He leads a traditional Greek wedding band. He plays a bouzouki through an old fender amp. Well when he finally to play a gig as the pandemic started to subside he found his amp doesn’t work. He brought it to me to see if I could do anything with it. It was an easy fix and when I was showing him it working he asked if there was anything that could give him a boost.

Well you can see where it led from there. We tried a couple of boosts and the Katana worked best for his setup. He asked if I could make him one and this is what I built.

This is the second PedalPCB Cleaver build for me. The first had the push-pull and side knob. When I got knobs for that I bought several. I had painted the enclosure as I was waiting for the PCB. With it was done I was trying to decide on hardware, someone mentioned the clear potentiometers on Facebook. That gave me an idea. I ordered the pot from smallbear that had the clear plastic shaft. When the board arrived I started the build.

One thing I wish is that the clear shaft had a better way of setting the LED inside. It hampers the rotation of the shaft a little bit. There is a little rebnound from the wire twisting, and I wonder if the wires will get weak over time.

For this build I did not use the acrylic paint pens. I just used paint and brush. I reworked the body of the peacock a little after it was baked. I did not like how the back transitioned into the tail feathers. I also changed the head to look more like a peacock as well.

I will have to create a demo and show off the pedal. More for myself so that I have a record of the pedal and what it looked an sounded like. I have a hard itme letting things go but it is not going far.

I really hope he enjoys it.